This kind of thing doesn’t help SA’s capitalist apparatus, already under fire from many in the ruling party, demonstrate that it’s not the extractive system gamed to reward the powerful that its critics claim it is

To Albie Cilliers, one of SA’s handful of shareholder activists, the executives who charge immense “management fees” even as their shareholders take a beating are akin to “the politicians sitting at home during Covid-19, getting paid full salaries while the rest of SA Inc bleeds”.

Cilliers was talking, in particular, of African Rainbow Capital (ARC), owned by Patrice Motsepe, which walked into a storm this week for its plan to shovel large chunks of cash at its executives, even though the share price has slid 67% since it listed on the JSE in 2017.

It has become a corporate cliche for CEOs to talk self-righteously about how their “interests are aligned with shareholders” — the ARC example illustrates that often this is just glib lip service.

So how did this happen?

ARC has a complicated structure: investors buy into the fund, which is “managed” by the executives who earn an immense fee for doing so — equal to 1.75% of the fund’s net asset value (NAV).

It’s a structure that has produced a windfall for the lucky executives, who’ve been paid R453m over the past three years.

Investors have been rather less lucky.

The problem is, ARC’s sliding share price is now 70% below its NAV. Some discount isn’t entirely uncommon: as companies such as Remgro will tell you, the market often ascribes a lower value to a company than the NAV calculated by management. But what is less forgivable is that ARC’s “management” reward themselves not according to the market price but on the basis of the much larger NAV.

This contrast can be seen in the fact that ARC’s NAV has risen from R8,7bn to R99bn since 2017, (ensuring juicy, escalating fees), while shareholders have seen their investment fall from R8.68 a share to R2.75. It’s problematic for many reasons — not least that this structure incentivises ARC to chase deals to boost the NAV, rather than focus on the return made by any investment. So much for “alignment”.

And ARC’s tone-deafness to the plight of its shareholders has only made it worse.

This month, it published a prospectus revealing that while it wanted to raise another R750m from its bruised investors in a rights issue, it planned to immediately shunt 27% of this, R205m, to settle its outstanding “fund management fee”.

In other words, ARC would raise money from investors at a 70% discount to its NAV, only to flick a good chunk of it to pay management fees worked out, conveniently, at the higher NAV.

It sparked outrage. Venture capitalist Vusi Thembekwayo called it “simply outrageous”, while RECM’s Piet Viljoen said ARC was “one of the many listed companies that are so clearly not being run for shareholders; and they’re not even pretending any more”.

This kind of thing doesn’t help SA’s capitalist apparatus, already under fire from many in the ruling party, demonstrate that it’s not the extractive system gamed to reward the powerful that its critics claim it is.

Last week, ARC CEO Johan van der Merwe told the FM: “The fee is something that was there from day one. Maybe some people didn’t like it, but if they didn’t, they shouldn’t have bought shares.”

It’s hardly a substantive response. Then, late last week, ARC responded to the criticism by saying it wouldn’t pay the management fee out of the proceeds of the rights issue, but would pay it out of “internal cash resources”. Which, of course, is just another sleight of hand: ultimately, investors’ money will pay the fee regardless.

ARC isn’t the only investment company doing this — Sabvest is another example. But it underscores the view that executives make out like bandits, come rain or shine, while investors end up holding the bag.

What can be done? Cilliers proposes that shareholders of investment holding companies should demand that management fees be linked to whichever is lower, market value or NAV.

This seems fairer. And it would go a long way to show investors that executives mean it when they say they’ll share any pain or gain with investors. 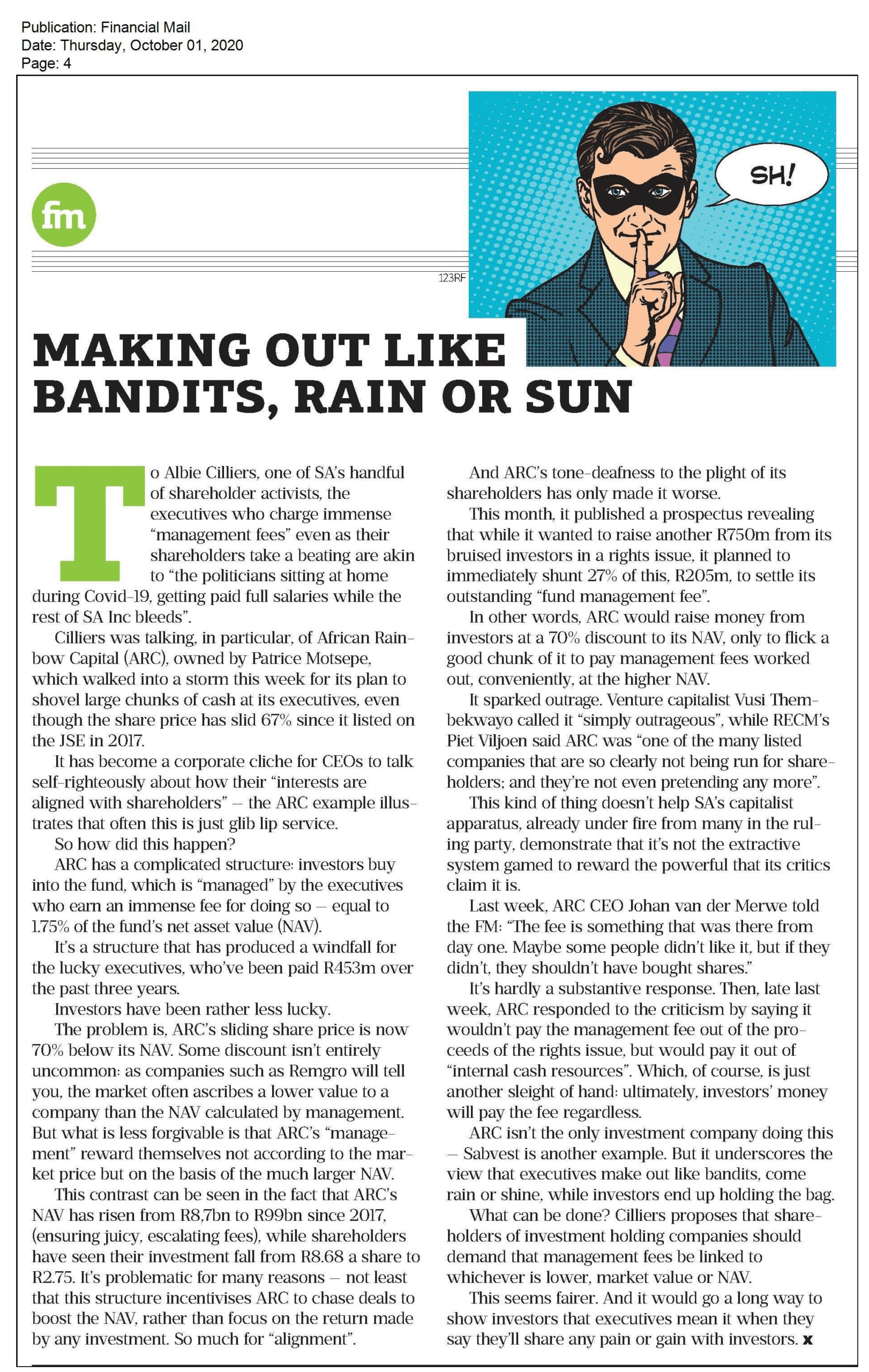 The full text of email needs to be revealed