DIGITAL retail bank TymeBank has reached the 3 million customer milestone amid the challenging Covid19 crisis, and says it will power on to expand future offerings that will include insurance and value-added services.

TymeBank, which was launched in 2019, said its lower fees were a compelling proposition for consumers, with onboarding customers of between 100 000 and 120 000 each month and between 3 000 and 5 000 new customers every day.

Although the bank entered into a deal with the Zionist Christian Church in February last year to onboard a large proportion of the church’s 9 million member base, the initiative has largely been postponed due to the impact of the Covid-19 pandemic and would gain momentum once Covid-19 preventative measures were relaxed.

The digital bank, whose majority shareholder is Patrice Motsepe’s African Rainbow Capital (ARC), a black-owned investment company, continues to muscle into a sector dominated by the big four – Absa, FirstRand, Nedbank and Standard Bank – as well as Capitec.

TymeBank chief executive Tauriq Keraan said: “Financial institutions need to be responsive to consumer preferences. Banking customers are sensitive to costs impacting adversely on their financial health, particularly in these tough times. They also want to know exactly what they’re paying for, and TymeBank’s simple, transparent, affordable banking offering is giving our 3 million customers what they want and need.”

TymeBank has no monthly banking fees. In most cases, transaction costs are 30 to 50 percent lower than what customers would pay at other traditional banks, which are saddled with legacy issues.

PricewaterhouseCoopers, in its Major Banks Analysis last week, noted that the need among the big banks to be agile and “speedy to market” through the Covid-19 crisis would not be a temporary phenomenon.

Platform-based banking, increasingly led by digital channels, datadriven targeting and offering a multitude of applications, were likely to foster a new era in how the major banks delivered financial services, the report highlighted.

The combined headline earnings of South Africa’s major banks fell by a substantial 48.4 percent to R43.6 billion in the 2020 financial year due, in the main, to the weak economy and considerable uncertainty following the pandemic.

TymeBank is regulated by the Prudential Authority of the South African Reserve Bank and has to comply with strict banking regulations.

Keraan said: “In line with satisfying customer needs and living up to the promise of a great banking experience, over the last year we have added an average of four new features monthly to our customer interfaces, including extending our app availability, upgrading our website and enabling e-commerce locally and internationally to cater for customer behaviour during Covid-19.” Keraan said TymeBank’s priority was to broaden its offering to include innovative credit and insurance products, plus a variety of value-added services.

In 2020 the bank announced a partnership with Hollard Insurance, whereby it distributed a funeral plan through its kiosks in Pick n Pay stores. However, now it planned to offer additional products within other insurance categories via a TymeBank digital marketplace sometime in the future, which it would curate form other insurance providers, Keraan said.

TymeBank said cash deposits at Pick n Pay and Boxer stores averaged more than R5 million per trading hour, while customers had deposited more than R10 billion into their TymeBank accounts in the past six months.

The bank has immaterial exposure to credit risk.

In the bank’s Quarterly Pillar 3 disclosure as at March 31 last year, it said credit lending was still in its test phase when the Covid-19 pandemic emerged as a significant threat to the global and local economy and, as a result, the bank decided to cease all further lending in April last year.

The bank has since halted any unsecured lending to customers and instead has developed innovative credit products. The first product called MoreTyme, which will be some sort of a laybuy product, was expected to be launched in April.

ARC said in its results for the six months to the end of December that its indirect investment in TymeBank totalled R1 179m as at December 31 last year. 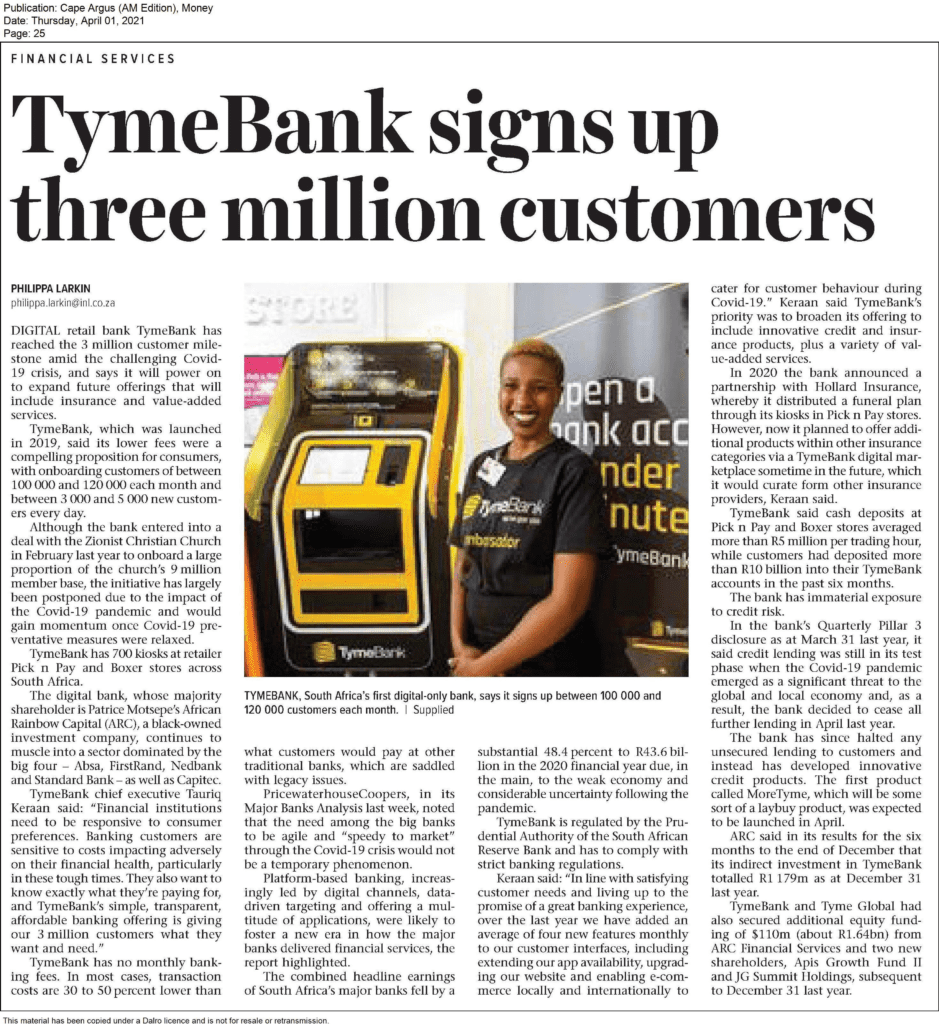 TymeBank has launched its first credit card. The bank says it is responding to customer…