Imagine if sleepy old Absa used the courts to try to stop one of the new digital banks such as TymeBank or Bank Zero from opening, or Santam tried to strangle new short-term insurers such as Naked and Pineapple in their early years.

Yet the JSE did its best to stop any of the alternative exchanges from offering their services to the public. In other words, the same monopoly thinking dating from the days when the SABC opposed independent radio stations.

It’s not as if the JSE can honestly claim it has done a great job in attracting new players to the market: look at the dismal collection of shares in its small-cap AltX board and, before that, the Development Capital Market and the Venture Capital Market.

You could accuse JSE management of preferring to swan around conferences such as the World Economic Forum than get its hands dirty searching SA for potential new listings.

Perhaps there are too many exchanges for such a small market.

But SA has unusually high demand for restricted shares, which can only be sold to members of certain racial groups, for instance, and the JSE’s rivals — EESE, 4AX and ZARX — support these companies, along with those that only allow trading between members of the same farming consortium, for example.

The JSE’s most direct competitor is A2X, which is headed by Kevin Brady, who previously worked for stockbrokers Barnard Jacobs Mellet and for Investec. Brady says the most obvious competitive advantage at A2X is cost, which, at a 0.64 basis points trading fee, is less than half that of the JSE.

That’s possible, says Brady, because unlike the JSE, A2X doesn’t have to run pedal-driven legacy systems.

Brady says A2X is comparable to a multilateral trading facility (MLF) in Europe. In some countries companies do not have to list officially on MLFs, though if it can execute at a lower price than the legacy exchange, any counter can be traded on an MLF. This will become even more likely once best-execution rules are introduced. Brokers would then be considered to be acting against the interests of their clients if they went for the pricier option.

Like the JSE, A2X uses the Strate central securities depository. But as it takes only secondary listings, there is no further cost, risk or additional regulatory burden on the listed companies. Brady says that if a quarter of trading is done on A2X there will be an annual saving in exchange fees of R200m.

Brady may well attract inward listings to bypass the JSE and go straight to A2X. There certainly isn’t any downside to a joint listing on two bourses. For now, A2X has nine of the shareholder weighted index top 40 including Naspers, Standard Bank, Sanlam, Sasol, Nepi Rockcastle, Growthpoint, Exxaro, Aspen and Mr Price.

And it is not too much of a surprise that entrepreneurs, including Peter Armitage at Anchor and Magda Wierzycka at Sygnia, have been early adopters of A2X. Without the lockdown it might have gathered a lot more names; it is hard to understand why FirstRand hasn’t followed Standard Bank, for example. It will be a battle, though, to attract dual-listed shares such as Anglo American, which have only a secondary listing on the JSE. Will it want to have a listing in two exchanges in a country which accounts for a diminishing portion of its assets?

It’s also interesting to see that several brokers have remained aloof and do not trade through A2X. They include stuffy old line firms such as JPMorgan, UBS SA, Merrill Lynch and Citigroup; admittedly, none known for major innovation. 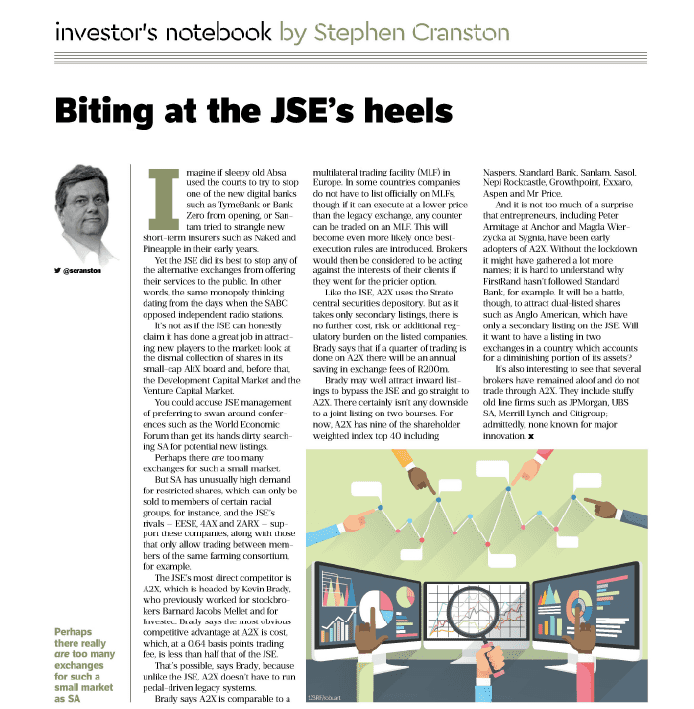