Kropz, a phosphate mine developer, plans to raise up to $100m in 2020, after it brings its SA project to steady-state production. The group, whose biggest shareholder is Patrice Motsepe’s African Rainbow Capital, is also considering a listing in Johannesburg.

The plan is to develop the largely completed Elandsfontein phosphate project near Saldanha in the Western Cape at a cost of $16m and bring it to steady-state production of about 1-million tons of phosphate rock a year in 2020.

After that, Kropz which is traded on London’s Alternative Investment Market where it raised $35m in 2018 will look to raise $80m-$100m to develop a similar-sized mine at Hinda in the Republic of Congo, said CEO Ian Harebottle.

Phosphate, which is used to make fertiliser, is a mineral that is poorly understood in the general investor base, something Kropz will have to address if it does list on the JSE, where most junior mining, development or exploration companies have struggled to gain traction. African Rainbow Capital holds a 47.8% stake in Kropz.

The company, which was until November 2018 a private company, has already sunk $125m in building a plant and mine at Elandsfontein but ran into technical, processing and mining difficulties, and a fierce challenge over its water use licence, leading to the project’s suspension.

The water matter is tied up in an appeal hearing at the Water Tribunal, but Kropz has departmental approval to continue pumping water that flows underground to a large and environmentally sensitive lagoon at Langebaan.

The company has 13 government departments and organisations working with it in a water monitoring committee as it pumps its open-pit mine dry to access the higher-grade areas of the phosphate deposit ahead of restarting operations, which have been freshly re-engineered towards the end of 2019, said Michelle Lawrence, technical director at Kropz.

Kropz would ideally like to have three buyers of its concentrate containing 31% phosphate. It has secured one contract with SA’s Foskor, which will buy about 300,000 tons of material a year, and ship it from Saldanha to Richards Bay where it has a processing plant. The Kropz phosphate comes from ancient sedimentary deposits, while Foskor extracts its phosphate from volcanic deposits.

Two more contracts — with Keytrade, a Swiss fertiliser and fertiliser materials trader, and India’s Kalyaan Resources are expected to be signed before the end of 2019, accounting for the remaining two-thirds of production, Harebottle said.

Elandsfontein will produce its phosphate at about $55 a ton delivered to ships in Saldanha, against the prevailing price of about $100 a ton.

The successful ramp-up of Elandsfontein in 2020 could open the way to a listing in Johannesburg, something about which he said the company was talking to advisers and consultants but was not pushing hard because the board is prioritising the start of the mine.

Once Elandsfontein is operational, Kropz will fully attend to raising up to $100m to build a 1million ton a year phosphate mine in the Republic of Congo.

It will advance work at its early-stage deposit in Ghana, with the intention of being a 3million tons a year, low-cost phosphate supplier from 2025. 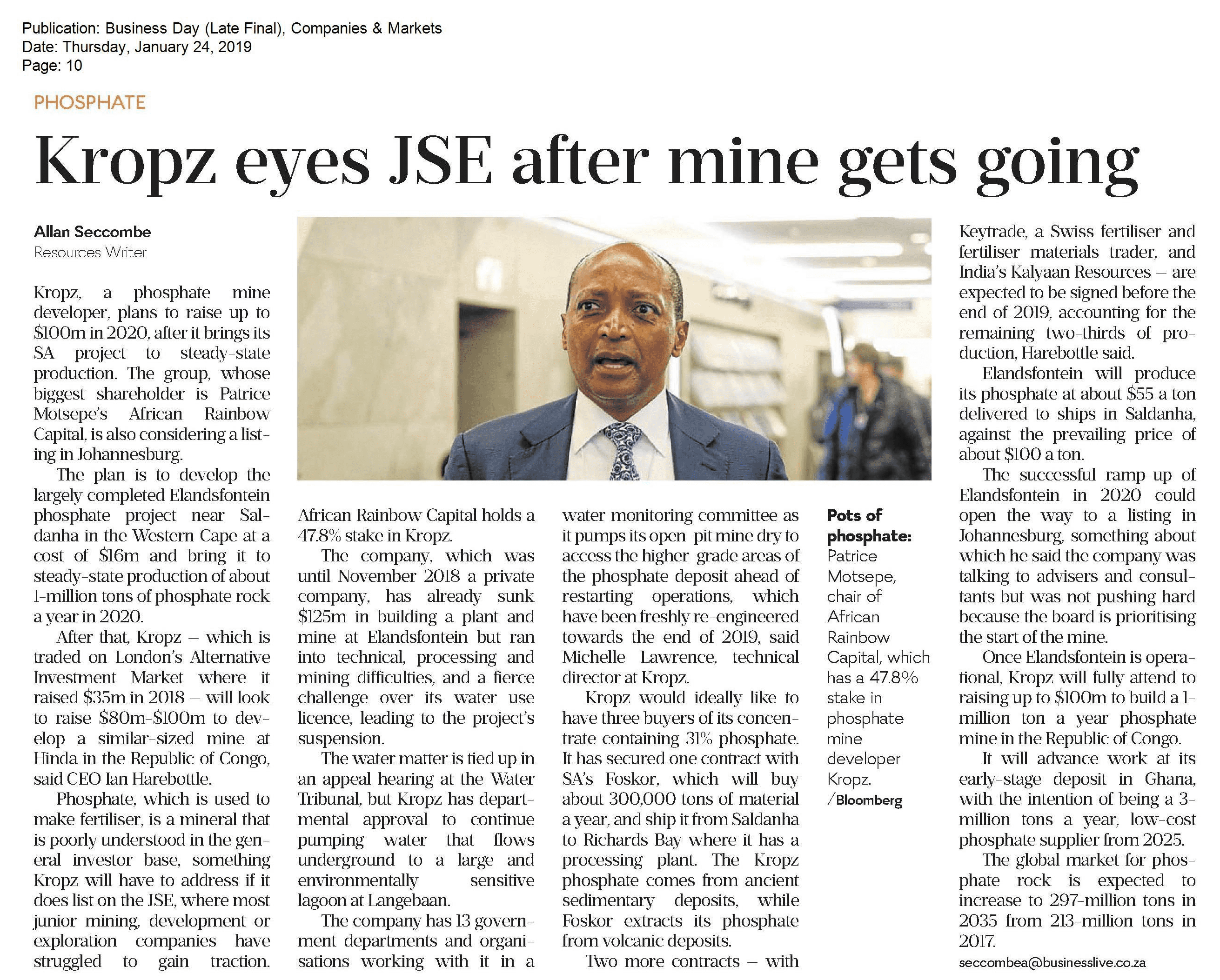