By Warren Thompson and Londiwe Buthelezi

ARC on Thursday launched a life insurance company in partnership with Sanlam called African Rainbow Life (ARL), which will be the next building block in the development of a black-owned financial services conglomerate that Motsepe hopes will rival the country’s largest financial institutions.

The new group is SA’s second mainstream insurer to have a black management team after Hollard. It has chosen to enter the market offering a full suite of products to all income segments.

Unlike the other businesses in its portfolio, ARC has opted to start this one from scratch, as opposed to acquiring an existing company.

“For a business to be successful in this space, a number of new approaches are required in how clients are reached and serviced, one of which is to steer clear of legacy issues as far as operations and distributions are

The new venture is owned by ARC and Sanlam, which also has a business serving the entry-level market, Sanlam Sky.

The birth of ARL came out of the two-pronged BEE deal sealed between Sanlam and Motsepe in 2018 in terms of which the insurer would grant ARC’s parent company UbuntuBotho, a R2bn loan to form a new insurance company.

Sanlam owns the controlling 51% stake in the new insurer. ARC Financial Services holds 26%, while the rest is held by ARL’s management consortium that includes a staff, community and management trust.

ARL CEO Bongani Madikiza said Sanlam and ARC are joining forces so that they could compete better in a world dominated by companies such as Old Mutual and Assupol.

“We must think about how do I beat Old Mutual, how do I beat Assupol. Our aim is to get a foothold that will allow us to become a sizeable business over the next five to 10 years.”

Old Mutual still commands the biggest share of entry-level retail insurance in SA. The other big player is Metropolitan, which held 18% market share in the lower income segment at the end of 2018. Sanlam Sky said it had no verifiable market share statistics to share.

Madikiza said ARL wanted to disrupt the entry-level market by dealing with that segment of the market differently.

The insurer is targeting low income customers in black communities, especially given their extended family obligations and rising dread disease incidents among them.

“What we are finding in the black communities is that there are rising dread disease diagnoses, but very few people have cover for that but you find a lot of funeral cover.

“Let’s not have people taking six funeral benefits because when you take a composite of what people pay for those policies, you will find that they pay way more. They will still have money left even after paying for life cover. You may think that a R400,000 cover is not going to make a difference in a person’s life, but actually it does in this market,” Madikiza said.

The insurer said this market had been underserviced and there are not enough financial planners who understand the complexities of African families and their traditions.

Madikiza said the insurer would launch with a compliment of 120 financial advisers who can help families navigate the complex implications of traditional marriages, the rights of cohabiting partners, as well as extended family members. 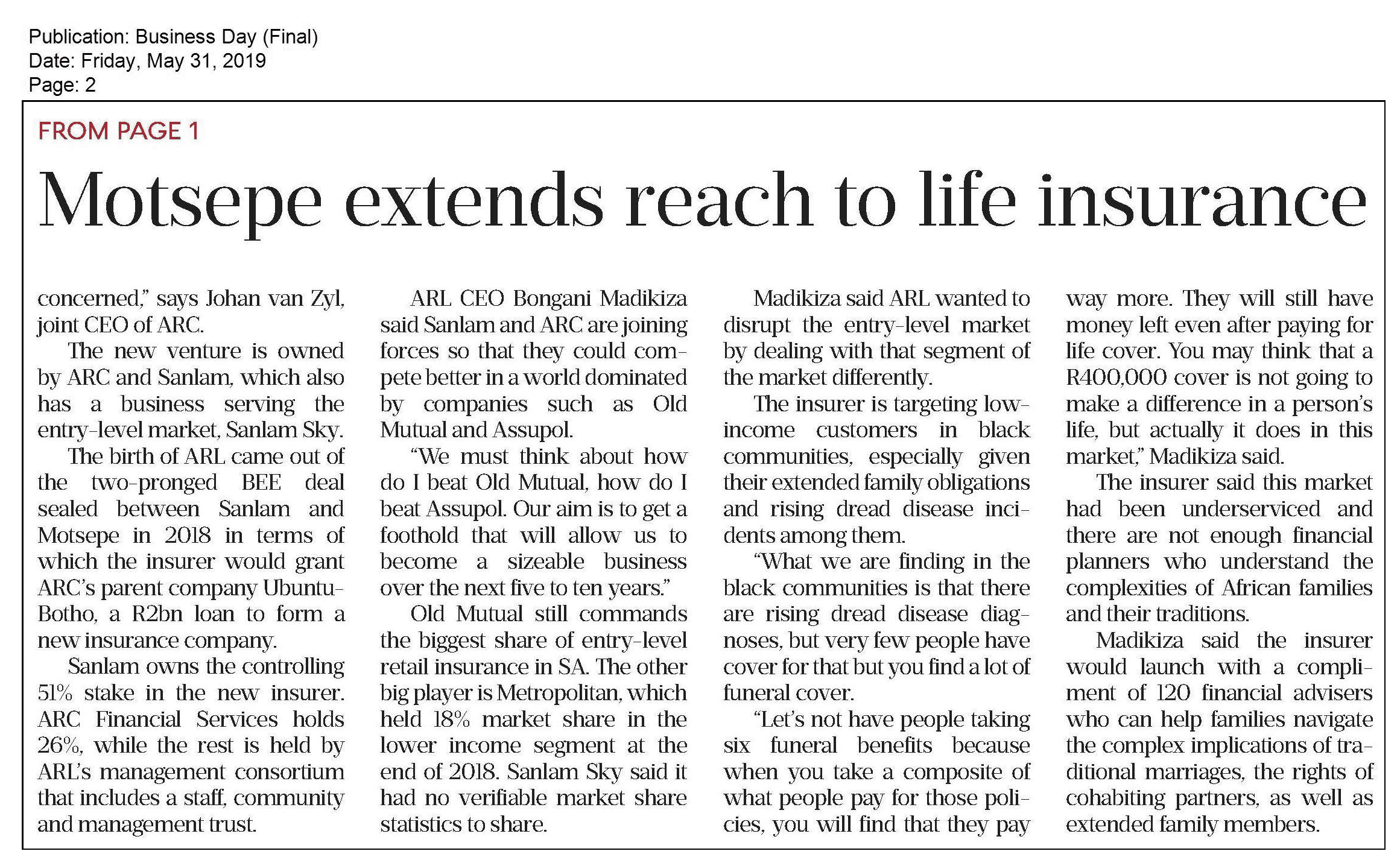 TymeBank has announced that it has secured an investment of R1.6 billion from new investors…