There is pressure for pension funds to hire more black-owned fund managers. But it remains a shallow pool. Alexander Forbes publishes a BEE Manager Watch, but it would be a very short survey if it included only 100% black-owned and 100% black managed businesses.

Take All Weather Capital, where half of the executive and half the portfolio managers are white. Only Cachalia Capital and Legacy Africa have a 100% black staff. Prescient, founded by Herman Steyn, could never be described as a BEE manager, but it made a marked transition after it received a capital injection from former Liberty CEO Thabo Dloti. Yet half of its executives and almost half its portfolio managers are white.

And there has been a high turnover of BEE managers: whatever happened to Wipan, Real Africa Asset Management and Alliance Odyssey? The figures would look much worse if coloured and Asian-heritage investment professionals and shareholders were excluded. The black African statistics are alarmingly poor. And the mainstream managers cannot be penalised, because the majority of black investment professionals still work in the large, established firms.

The deciding factor, of course, has to be performance. As a pension fund trustee I want to invest with a fund manager that has the skills to run a balanced fund, including all its underlying components, such as foreign and domestic equity, bonds and property. I do not want to build up an orchestra from scratch.

There are four contenders in what Forbes calls the global balanced category: Kagiso Global Balanced, Lima Mbeu Multi-Asset Portfolio and two quant-driven contenders from Prescient: Prescient Balanced and Prescient Absolute Balanced. Lima Mbeu does not yet have a three-year track record, nor can we draw comfort from the record of a star manager, as the team is unknown. Its main shareholder is African Rainbow Capital, so it should have a future in the Sanlam/ARC complex.

Prescient is a serious asset manager, but hasn’t it just rented blackness from Dloti?

Kagiso would be the only contender in the traditional balanced category, though it did not have a glorious start. It was created by Coronation, and then CEO Thys du Toit admitted that it was a semi-autonomous bantustan. Du Toit would pimp it out to pitch for public sector business — especially from the Public Investment Corporation. It took several years for Kagiso to shed its image as an index fund manager and to be accepted as a traditional active manager.

Over three years its 5.2% annual return puts it ahead of Ninety One and Allan Gray, and almost level with its old parent, Coronation. Kagiso has made the transition in the mainstream fund management universe, but before investing with it I would like to be sure of succession planning now that kingpins Gavin Wood and Abdul Davids are sprouting a few grey hairs.

For now the widest choice of BEE managers is in domestic equity, where most black fund managers learnt their craft.

Their performance over the past year can look good or bad, depending on the benchmark used. The all share was down a modest 3.3% over 12 months, but many portfolios are now benchmarked against the capped Swix. This caps shares at a 10% weighting, and therefore reduced exposure to Naspers, which was a relatively strong performer. It fell 10.8%.

The best performer was a positive 0.45% from the Prescient top 40 fund. Aluwani also had a respectable 0.7% loss. Aluwani was started by RMB Asset Management staff when parent company Momentum decided, in its wisdom, to close its full-service asset manager. Lebashe, the controlling shareholder of Business Day, owns 20% of Aluwani.

Aluwani is also known for its bond portfolios, though over 12 months it is in the middle of the pack with a 2% return, behind the Oasis Bond Unit Trust (3.6%), Vunani Active Bond (2.6%) and Prowess Corporate Bond. The only negative performance was from Prescient Bond QuantPlus.

There was plenty of red ink in the equity funds, however, and a few did not even beat the undemanding capped Swix over the past year.

Mazi lost 16.6%, an unfortunate reversal for Malungelo Zilimbola, who for years looked like the best black stock picker in SA. But he will come back; his style means that when he is bad he is shocking, but when he is good he is excellent.

Perpetua True Value Equity can use its commitment to the value style as an excuse to lose 13.6% of its clients’ money, and perhaps it deserves a position in a multimanager portfolio to counterbalance the mainstream managers. But chief investment officer Delphine Govender still has to show the investment skills she displayed at Allan Gray. If I were a client I would want to know how she so woefully underperformed Mashuda Cassim’s Cachalia Capital Value Fund, which lost just 0.2%.

Among the reputable names there were acceptable performances from Aeon (down 3.8%), run by former Metropolitan chief investment officer Asief Mohamed, and Argon (down 4.3%), which has had a revolving door of staff over the years. One of the president’s favourite economists, Thabi Leoka, even worked there. Argon has grown to a midsized firm of more than R15bn, in spite of staff turnover. But it still doesn’t offer a traditional balanced fund, even though it has the resources to run one quite competitively. 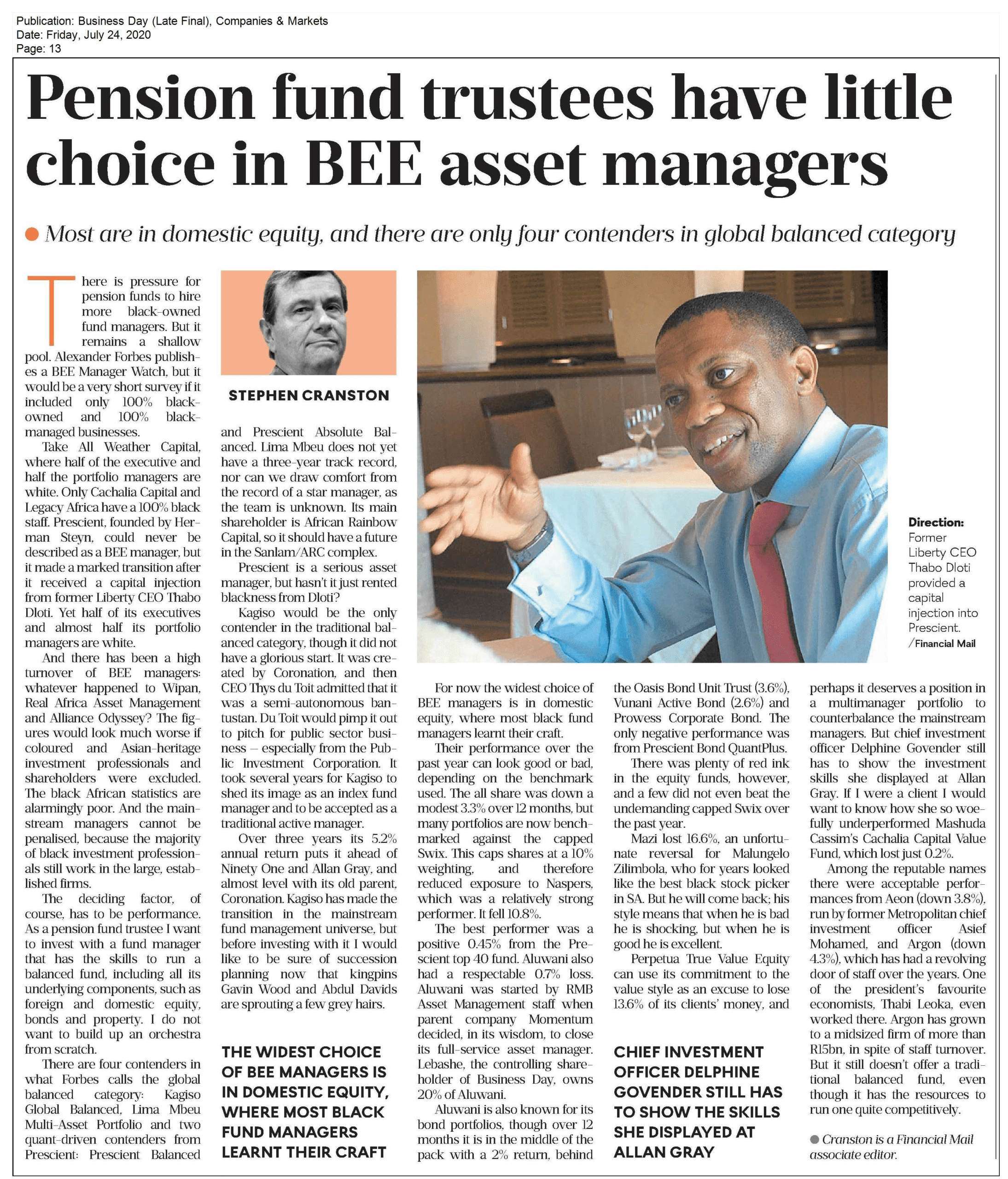