JOHANNESBURG – African Rainbow Capital Investments (ARC Investments) said on Friday that TymeBank had put on hold its foray into the unsecured lending space as a result of challenging market conditions in the wake of the Covid-19 outbreak.

The digital bank, which was launched in February last year, said in terms of the bank’s credit business, and specifically its unsecured lending proposition to customers, management was exercising significant caution in the context of a challenging economic environment.

“The bank is considering alternative credit products which do not carry the same longer-term risk as an unsecured term loan,” the bank said.

ARC Investments, Patrice Motsepe’s investment holding company, is a majority shareholder in TymeBank and has piloted the unsecured lending, but it was not formally launched.

TymeBank grew its customer base to 1.8million customers by the end of May, and the group said this milestone was well ahead of its growth schedule.

The bank said that its growth trajectory was continuing, and it was signing on 100000 customers a month.

“Of the current 1.8million customers who have opened bank accounts, approximately 900000 are active accounts. The average number of transactions per active customer is consistently increasing,” the bank said.

TymeBank achieved R1billion in customer deposits in April, and the growth in deposits remained strong and ahead of the business plan.

However, TymeBank experienced some lower footfall to its kiosks located in Pick * Pay and Boxer stores in March, when the government implemented the lockdown.

“Coupled with ambassadors having worked less hours as a precautionary measure, and therefore translating to less assistance to on-board customers and deal with customer queries, it resulted in the bank on-boarding approximately 20percent less customers in April,” the bank said.

ARC Investments also has a stake in mobile operator Rain. The group said Rain was making good progress with the roll-out of its strategy, which is to establish a data network in metropolitan South Africa.

“Rain 4G roll-out has progressed well, with 5500 active sites live as at the end of April. Rain has an infrastructure and services agreement with Vodacom that has enabled the rapid growth of the 4G network. Vodacom roams on the Rain 4G network, providing a significant proportion of Rain’s revenue,” the group said.

ARC Investments’ shares closed 0.71percent higher at R2.85 on the JSE on Friday. 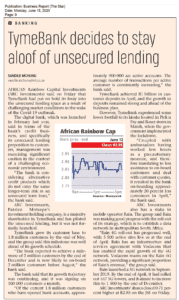